Canada and the U.S. have announced a tentative new trilateral trade deal with Mexico that includes some key concessions on issues of import to both countries — and also a reworked name: the United States, Mexico and Canada Agreement (USMCA). 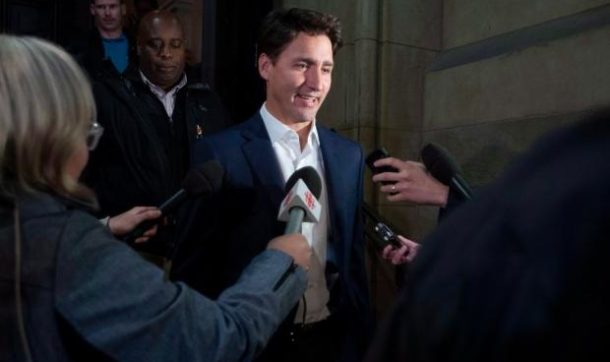 “It will strengthen the middle class, and create good, well-paying jobs and new opportunities for the nearly half billion people who call North America home,” the statement said. “We look forward to further deepening our close economic ties when this new agreement enters into force.”

After 14 months of intensive and often fractious negotiations between the two countries, Prime Minister Justin Trudeau convened a late-night meeting of cabinet to brief ministers because a deal had been reached only hours before a U.S.-imposed midnight deadline.

‘A good day for Canada’

Leaving the meeting about an hour and 15 minutes after it began, Trudeau said only that it was “a good day for Canada” and that he’d have more to say to reporters on Monday.

In a background briefing with reporters, a senior Trump administration official heralded the USMCA as a win for all three countries.

“This is a big win for the U.S., Mexico and for Canada and it fulfils one of the president’s most important campaign promises,” a senior Trump administration official said. “We think this is a fantastic agreement. It’s a great win for the president and a validation of his strategy in the area of international trade.”

At the heart of the deal is a trade-off between greater U.S. access to Canada’s dairy market, which is heavily protected by a system of supply management, and Canadian demands for the maintenance of a dispute resolution process.

The two sides have agreed to keep Chapter 19, NAFTA’s dispute resolution mechanism, intact. That’s a major victory for Canadian negotiators who have long sought to keep some sort of process to challenge anti-dumping and countervailing-duty cases — which Canada has deployed in the past over the softwood lumber file.

Chapter 19 will be preserved word for word, though it will be renumbered in the new agreement, U.S. officials said Sunday.

Lighthizer has steadfastly opposed this chapter, as he believes it’s a violation of U.S. sovereignty to have a multinational panel of arbiters decide on the acceptability of U.S. tariffs.

A Trump administration official deflected Sunday when asked if preserving Chapter 19 was a win for Canada. “From our perspective we think there’s really, really great things in this agreement. We’re excited about those parts of it,” the official said.

(Chapter 11, however, will be phased out between the U.S. and Canada, Trump officials said. This chapter, which outlines the investor-state dispute settlement, allowed corporations to sue governments at special tribunals for interfering in their business.)

​In exchange for some U.S. concessions on a dispute mechanism, Canada is expected to give U.S. farmers greater access to Canada’s dairy market by increasing the quota on foreign imports.

Under the current supply management system, Canada imposes tariffs on dairy imports — which can run as high as 300 per cent — that exceed the established quota. Trump has railed against these tariffs as unfair to American farmers, as they are designed to keep foreign products out while privileging Canadian sources.

Dairy concessions could be politically challenging

Some of what Canada has agreed to could be politically challenging for the Liberal government, especially in Quebec, where dairy farmers hold electoral sway in certain ridings.

Under the new NAFTA, the U.S. will have roughly the same access to the Canadian dairy market as what was given up by Trudeau when he signed the Comprehensive and Progressive Agreement for Trans-Pacific Partnership (CPTPP) trade deal with 10 Asia-Pacific countries earlier this year.

Under that agreement, those 10 countries will have market access that equals 3.25 per cent of Canada’s annual milk production. The exact percentage extended to U.S. dairy exporters was not immediately clear — but it will be marginally higher than that 3.25 per cent now open to Asian countries.

“We’ve achieved levels of market access, from the perspective of the U.S., that are a better deal than what the prior administration negotiated in TPP,” a Trump administration official said of what former U.S. president Barack Obama squeezed out of the Canadians on the dairy front.

But, perhaps most importantly for dairy producers, Canada has agreed to end what’s called class 7 pricing, a milk class created in March 2017 that slashed prices on some Canadian-produced milk ingredients — like protein concentrates, skim milk and whole milk powder — used to make cheese and yogurt. The co-ordinated price cut made the American equivalents uncompetitive.

Trump administration officials pounced on this change Sunday, touting it as a major breakthrough for American farmers, especially in Wisconsin and New York, where dairy farmers are eager to offload some of their product on Canada as they grapple with severe oversupply.

“On the dairy issue, we have a great result for our dairy farmers … and this was one of the president’s key objectives,” the Trump administration official said. “Canada has agreed to eliminate the class 7 milk pricing system, which is something that was very problematic.”

At the outset of the NAFTA talks, the U.S. demanded Canada dismantle supply management entirely — something that Trudeau has always maintained was a non-starter. Its preservation, save for a few tweaks, will be pitched as a success story by the governing Liberals.

Canada is also expected to sign on to this new NAFTA without any reassurances that the U.S. will lift its so-called “section 232” tariffs on steel and aluminum imports — a coup for the economic nationalists that surround Trump who believe that protectionist measures like these punitive tariffs can help salvage the declining U.S. steel industry.

“There isn’t any agreement on that at this point,” a Trump administration official said. “There’s been talk about potential discussions there, but that’s on a completely separate track.”

Those tariffs were levied on “national security” grounds using presidential authority granted under Section 232 of the Trade Expansion Act of 1962, which gives the president broad powers to impose tariffs without consulting Congress. Canada responded to Trump’s move with counter-tariffs on billions of dollars worth of U.S. goods.

While technically separate from NAFTA talks, the U.S. has used the threat of further 232 tariffs on autos to extract concessions from Canada and Mexico — a frightening proposition for the Canadians.

No hard limit on auto exports

Importantly for Canadian negotiators, Trump has agreed that no hard limit will be placed on Canadian auto exports to the U.S.

That said, should the U.S. move forward with the imposition of worldwide 232 tariffs on autos, they would also apply to Canada.

However, Ottawa has negotiated what is effectively an exemption, as it would still be able to export cars and parts tariff-free up to a certain amount that is well above what Canada sends south of the border.

Sources could not immediately confirm the exact number of cars or parts that would be allowable, but U.S. officials said there has been an “accommodation” reached.

Last month, Trump announced his negotiators had reached a bilateral deal with Mexico.

The Canadians have already said they are pleased with what the U.S. had negotiated bilaterally with Mexico on changes to “rules of origin” around autos, championing the changes as good for middle-class workers on both sides of the border.

The revised USMCA deal will require 75 per cent of auto content to be made in North America, up from 62.5 per cent under the current NAFTA.

It would also require 40-45 per cent of auto content made in Mexico to be made by workers earning at least $16 US an hour, placating unions in Canada and the U.S. concerned about high-paying jobs moving to Mexico’s low-wage economy.

According to the U.S. Trade Representative, Canada ships more than $56 billion US worth of autos — cars and parts alike — to the U.S. each year. The auto industry employs more than 120,000 people in Canada, with most of those jobs concentrated in southwestern Ontario.

Canada has also secured exemptions for its creative industries.

The existing NAFTA deal includes a cultural exemption clause, which means cultural goods are not treated like other commercial products — and that will continue under the new terms of the agreement. Lighthizer has previously cited Canada’s broadcasting content and telecommunication ownership rules as an irritant.

Deal to be sent to Congress

U.S. negotiators have been gunning for a new NAFTA by month’s end to get a text of the agreement to Congress for its mandatory 60-day review period. That could allow for a deal to be signed before Dec 1., when Mexico’s new, left-leaning president takes office.

Under U.S. law, while Congress can extend fast-track negotiating authority to Trump administration officials — as it has with NAFTA — legislators retain the right to review any proposed trade agreement and decide whether it will be implemented. That relationship is governed by a set of strict, legislated timelines that allow Congress enough time to study a deal before delivering a decision.

A Trump administration official said Trudeau, Trump and Mexican President Enrique Pena Nieto will sign the USMCA at the end of November.

It will then be up to the next Congress — which could be fundamentally reconstituted after November’s midterm elections — to ratify the agreement before it comes in to force.